Fields of the harvest 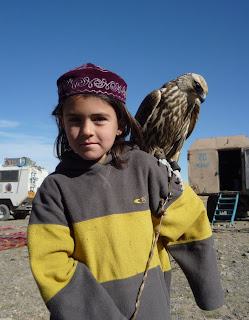 We had an amazing opportunity to take a long weekend and travel with friends to the annual Kazakh Eagle Festival in Bayan-Ulgii. Of course the kids were thrilled... Zeke has been waiting over a year to see the golden eagle hunters! We even met the youngest hunter, who got 4th place and was Zeke's age - 10! I don't think that they would trust any of us with their eagles, but we got to hold this falcon. 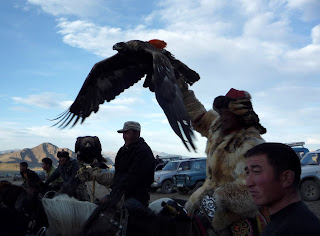 There were horse and camel races, a tug-of-war game on horseback, and lots of local crafts, but of course the eagles were the best part. They would take off from a small mountain and pounce on a fur being dragged behind their trainer. Some would wander off, some missed, but most were deadly accurate. I think the fastest eagle was about 12 seconds from peak to pounce. The hunters themselves were quite impressive as well, dressed in their furs and colorful embroidery. 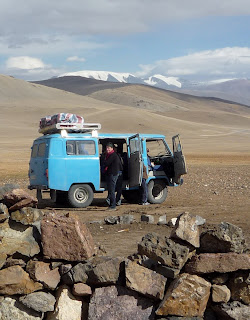 Not only that, but creation itself was most impressive. We stayed in a ger camp next to a large, clear river (I didn't know they HAD any large OR clear rivers in Mongolia!). There were even a few trees (right next to the river). But the mountains were awesome - jagged with a few perennial snowcaps. As we went through the highest pass our intrepid teammate (Larry) ran up to 9000ft... after we set up this base camp at 8800 ;)
Posted by Fields of the harvest at 3:06 AM No comments: 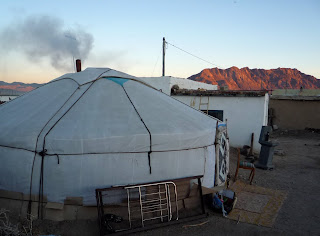 We made it to Hovd and, by God's grace, we have a home... temporarily. Living in a ger (yurt) is certainly a daily reminder that we are just pilgrims on earth! It's a beautiful spot on the northern end of town in the middle of the Kazakh neighborhood. We are surrounded by harsh yet majestic mountains (some of which we've climbed already). We can get fresh milk every morning... we just have to watch our step around the yard! 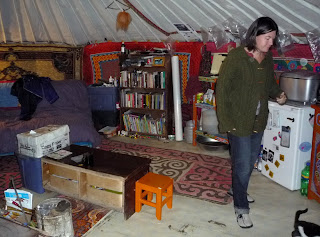 It is a fairly large, yet still snug ger. At first we weren't really sure if we would fit - no corners to stack suitcases, beds take up most of the wallspace, etc. This is the "kitchen" which transitions into the "library" and "master bedroom." 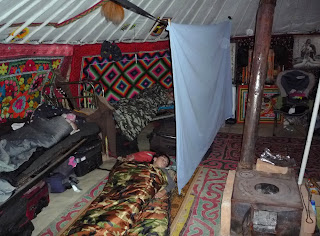 On the other side we have the "walk-in closet" transitioning into the "kids' bedroom." Notice how we even hung a sheet to give the illusion of actual rooms! In the center, of course, is our fireplace (and "dining room"). We use a bit of wood (the neighbors use brush) to get it going and some coal to make it last longer, but primarily we are burning cow dung ($2/bag!). Any questions?!
Posted by Fields of the harvest at 5:13 PM 1 comment: